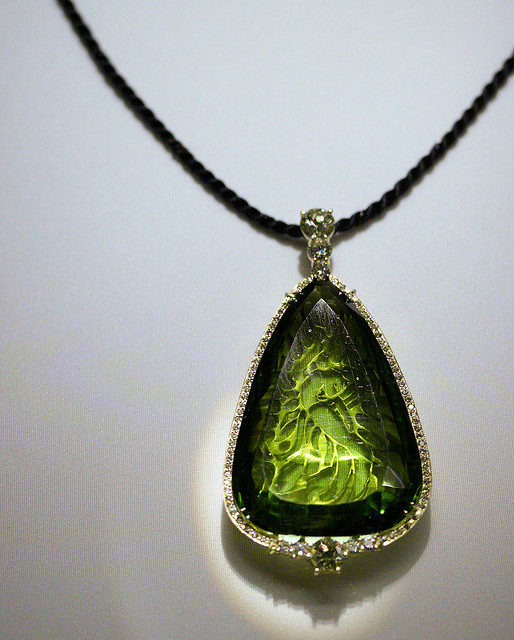 [This pendant is known as the Green Goddess. It weighs 154 carats and is surrounded by yellow diamonds.

In its most distinctive form, peridot is either citrusy or olive green, though it can run the gamut from yellowish green to brown. One of its nicknames is the “Evening Emerald,” so called because of the effect of looking at this semi-precious gem under artificial light, when it seems to glow bright green.

Legend has it that a gift of peridot bestows magical powers upon its recipient. It’s also credited with healing powers, and was believed to ward off nightmares. Despite its green colour, peridot was thought to free its wearer of envy, and for that reason, it was deemed a boon to friendship. It was said to ward off the evil eye, promote happiness, attract lovers, and strengthen the eyes. Roman sage, Pliny the Elder, cautioned that to activate a peridot’s magic, it must be worn on the right arm.

To Hawaiians, peridot symbolises the tears of Pele, goddess of volcanoes and fire. 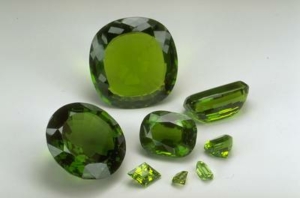 Peridots have been hugely important to Egyptians, and are their national gem. In Pharaonic times they called it “the gem of the Sun”, and records prove that it was mined as long ago as 1500 BC. Peridot was often carved to make talismans, which work best, say the legends, if the stone is set in gold.

In ancient times peridots were mined on Topaz Island (now St John’s Island) in the Red Sea. It’s thought that the island’s inhabitants were forced to mine the gems for their Pharaoh, and instructed to kill anyone trying to trespass on the island. They are said to have worked day and night.

Over the centuries, many have confused peridots with emeralds. The gem on the shrine of the Three Holy Kings, at the Cologne cathedral, was long presumed to be an emerald, but further research has revealed that it is a peridot. In light of this confusion, some historians now suspect that the famous emeralds worn by Cleopatra were actually peridots, as well.

Peridots can be expensive in weights above two carats, and those over eight carats are rare.

Our Rose Street shop stocks Scottish jewellery, pre-owned items and watches from Citizen and Seiko. You can also call in for watch repairs.

I would like to arrange a viewing of this August Birthstone: Peridot at Goodwins Antiques